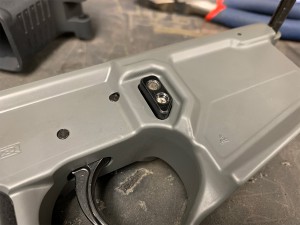 Building on the great success we have had with our SAFEMOD Mag Button, we have engineered a version that work with the Sig Sauer MCX / MPX rifles and pistols.

Installation is a snap. Just remove your old magazine release button and replace it with ours. Use the included set screw to prevent the button from being pressed. From our experience, we have seen a variation in the lower receivers for MPX / MCX. Some of them have a small recess that requires a slightly longer screw. Please examine your lower before ordering to figure out which one you need.

According to the NY SAFE ACT from the NYS Governor's website on the SAFE ACT, "Rifles requiring registration are: Semiautomatic rifles capable of receiving a detachable magazines." According to this definition of the law, but removing the capability of the rifle to receive "a detachable magazines" you no longer have to register the rifle and the banned features do not apply.

** NOTE: DO NOT BE CONFUSED BY OTHER AR MAGAZINE LOCK STYLE DEVICES WHICH ALLOW THE MAGAZINE TO BE REMOVED AFTER BREAKING THE ACTION DOWN. IT IS OUR UNDERSTANDING THAT THESE ARE NOT LEGAL IN NYS **

Don't be fooled by the copies and imitations of our SAFEMOD that are out there. We are the original designers and manufacturers of the twin-set-screw style magazine button lock. Often imitated, never duplicated.