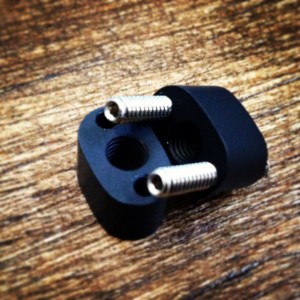 Introducing our in-house designed and manufactured SAFEMOD™ mag lock button. This mag button will modify your AR15 to no longer accept a detachable magazine and permanently affix an AR15 magazine in place. It works by preventing the button from being depressed once the magazine is inserted into the rifle.

The SAFEMOD allows NY AR-15 rifle owners to be able to build and purchase new AR-15 style rifles and stay compliant under the NYS SAFE Act of 2013. It also allows California AR15 owners to comply with existing fixed magazine laws and avoid Department of Justice registration, complying with SB 880 & AB 1135. Additionally, it's our reasonable belief that it complies with Connecticut , Maryland, New Jersey and other states' detachable magazine laws.

The SAFEMOD™ is made from aircraft-grade 6061 aluminum alloy and Type II anodized in matte black. Included with the SAFEMOD™ is a packet of epoxy to make the modification permanent. These are available for the reasonable price of $19.95, and for a limited time, you can add a second one for just $15 (2 for $35).

Installation is a snap. Just remove your old magazine release button and replace it with ours. It works in nearly all rifles we have encountered that use the standard AR15 magazine button, including .22LR rifle variants. Use the two included 18-8 stainless steel set screws and bottom them out into the button. Finally use the included epoxy to backfill in the holes. You now have an AR15 variant rifle that is no longer capable of accepting a detachable magazine.

According to the NY SAFE ACT from the NYS Governor's website on the SAFE ACT, "Rifles requiring registration are: Semiautomatic rifles capable of receiving a detachable magazines." According to this definition of the law, but removing the capability of the rifle to receive "a detachable magazines" you no longer have to register the rifle and the banned features do not apply.

** NOTE: DO NOT BE CONFUSED BY OTHER AR MAGAZINE LOCK STYLE DEVICES WHICH ALLOW THE MAGAZINE TO BE REMOVED AFTER BREAKING THE ACTION DOWN. IT IS OUR UNDERSTANDING THAT THESE ARE NOT LEGAL IN NYS **

Don't be fooled by the copies and imitations of our SAFEMOD that are out there. We are the original designers and manufacturers of the twin-set-screw style magazine button lock. Often imitated, never duplicated.