Just finished adding a sweet new rotating banner to the website home page, so I thought I'd remind you all to check out our Instagram account at @allstartactical! We usually add some great pics of our new shop, products, training pics, schwag, contests and more. Another great way to connect with us and see the "behind the scenes." Follow us!! :)

Good Evening!!! I wanted to give you all an update on our products that you all have preordered! I'm sure you guys and gals have been waiting (very patiently) for an update. My apologies for not posting one up sooner, but as you can imagine we have been crazy busy ourselves! Below is an update on each of the preordered products and an idea of when they should be expected!

Some of you have heard the unfortunate news when calling or emailing us on the status of these lowers. It sucks big time because these are one of our favorite products to work with and offer to our customers. We ordered nearly 180 lowers and uppers from the machineshop and expected them very quickly because the turnaround was quite short. After we ordered, we were notified that they were currently over 8 months behind. That news alone inspired us to purchase our very first CNC Mill (We'll certainly be blogging about that once it arrives), scheduled to be delivered around the 2nd week of April. On the positive side, we have received word from the machineshop that they're going to try to send us some lowers to fill orders while we bring our CNC up to speed! We are extremely sorry about the delay on this product as we anticipated it to be here before any of the others! If you guys have any other questions or concerns, please feel free to contact us!!!

I know most of this information was posted up at the start of the preorder, but I will reiterate as much of it here as I can. We order our forged lowers in batches of 500. Back in January is when we started placing our orders. Our first batch of 500 lowers was scheduled to be machined in the last week of March (Next Week!), and those are on schedule with no delays as far as we know. Then I would figure a week or two max for anodizing and delivery times. Our second batch is scheduled for May, and our Third Batch is scheduled for June. With the way our Delta preorders are going and our new Dealers are signing up, we will probably continue our forged orders through the rest of the summer! Once again, thank you for being patient, and we're trying to figure out an exact cut-off date for the deliveries, but we're still working on it as of now.

Our Keep Calm and Pew Pew Pew t-shirts have arrived and are shipping out to customers who ordered them and we're filling all new orders as well! The screen printer has been good about delivering us the shirts a few hundred at a time, and we expect the rest of the designs to be in stock within the next two week or so. We take full blame for the delay on this as we hesitated on ordering them to add the extra designs and order in one big batch (Over 1500 shirts!!). We're sorry for the delay and if you have any questions, just give us a shout!

Our phones have been ringing off the hook as of late and we're having trouble keeping up with them while trying to fill orders, build rifles, manage construction at the new shop, communicate on social networks, and answer customer emails, so please bear with us as we may miss phone calls. Send us an email to info@allstartactical.com and we'll try to get back to you as soon as possible!

Allstar Tactical strongly believes in our liberties and Constitutional rights as United States Citizens. Specifically, we fully support the second amendment to the United States Constitution, our right to Keep and Bear Arms. We vehemently oppose any attempt to illegally disarm law-abiding American citizens. Due to the infringement of our second amendment rights through pending and passed illegal legislation regarding our right to Keep and Bear Arms, Allstar Tactical has been forced to review it’s policies and procedures for providing any products to state and local government agencies.

Our headquarters is based in the state of New York less than 1000 feet from the West Webster Fire Department. On December 24th, 2012, we were deeply saddened, as was the rest of our community, to hear of the tragic events that took place right in our own backyard. Despite the fact that the mentally-unstable criminal who committed the criminal act was a known felon, Governor Andrew Cuomo used the deaths of our brave first responders to push through his gun control agenda, without proper discussion, effectively stripping inalienable rights from the citizens of New York State. This was especially painful for us, since many of our our brothers in the West Webster Fire Department, including those who lost their lives that day, were friends and supporters of our company, as well as loyal customers, and our cause.

The heinous NY SAFE act effectively prevents us from selling complete rifles to New York Sate citizens. This is appalling as I personally grew up in a suburb of Rochester, attended undergraduate and graduate school in Troy, NY, and chose to locate my family and businesses in a suburb of Rochester. We are tax-paying citizens and deserve the right to free-enterprise and the right to protect ourselves. Our own elected state officials have passed this illegal law which infringes on our inherent and historic rights, and is causing the state and local law enforcement agencies to enforce unconstitutional legislation. That said, we absolutely applaud and support the Sheriffs and law enforcement agencies who have stepped up and are fighting with us against the legislation.

There is a strong need for all of us to stand together in unwavering support of the 2nd Amendment and our right to keep and bear arms. As such, we are joining the rest of the firearms community in doing what we can to conscientiously object to the laws and legislation being passed. Those who cannot remember the past are condemned to repeat it. Historically, the disarmament of the populous is the first step toward the establishment of a tyrannical government. The passage of this legislation absolutely violates the Constitution of the United States, and ignores many of the Supreme Court rulings.

Due to the current legislation in New York and any states that pass similar legislation, effective March 1st 2013, Allstar Tactical will apply all current state and local legislation applicable to civilians, to all government agencies, including but not limited to, local and state law enforcement, first responders, sheriff departments, and federal agencies. In addition, we are suspending all LE/MIL discounts on our products in those states in which our second amendment rights are being infringed upon. Discounts for personal use by LE/MIL will be evaluated on a case-by-case basis. Lastly, we will absolutely continue to sell our stripped lower receivers in those markets where so-called “assault rifles” are now banned. Allstar Tactical prides itself on innovation and we are working feverishly to come up with new products that will allow you to enjoy the shooting sports in a banned state and comply with these unconstitutional laws until they are changed. We cannot in good conscience remain quiet while our elected officials attempt to strip our rights away. This will remain in effect until all such legislation is repealed.

Furthermore, under these conditions, as a NY-based firearms manufacturer, tax-payer, employer, and resident, we are also looking into the possibility of relocating our headquarters and manufacturing facilities to a more second-amendment-friendly state in the Union. This decision will not come easy for us, but, in the meantime, we will fight with our brothers and sisters in New York for as long as we can. To this end, we will be opening a new manufacturing facility to increase our production capacity, and provide additional jobs for NY residents.

United We Stand; Divided We Fall.

We've added 8 new stickers to the site! Because of that we decided to separate all of our stickers out into their own section!!! Check it out and check out the pics of the new stickers below!! 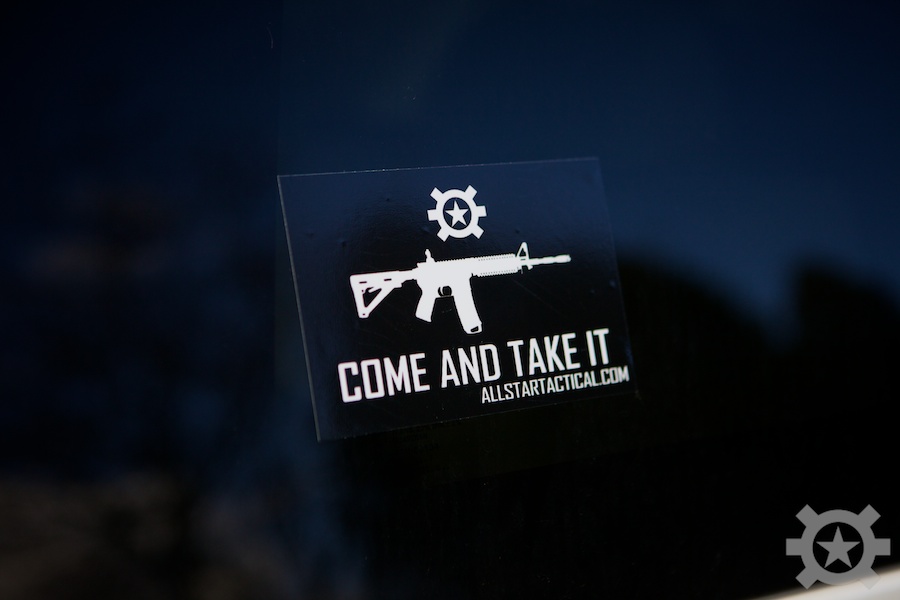 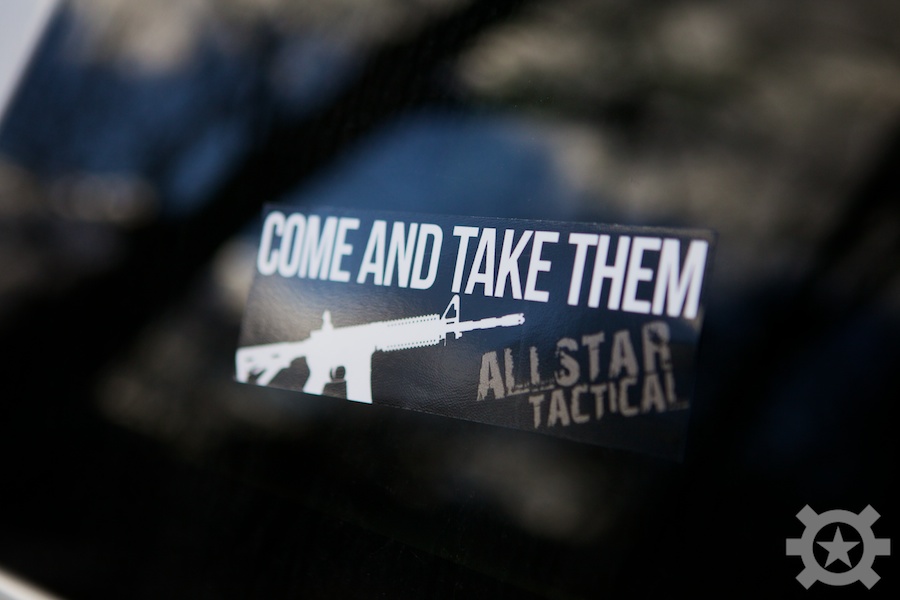 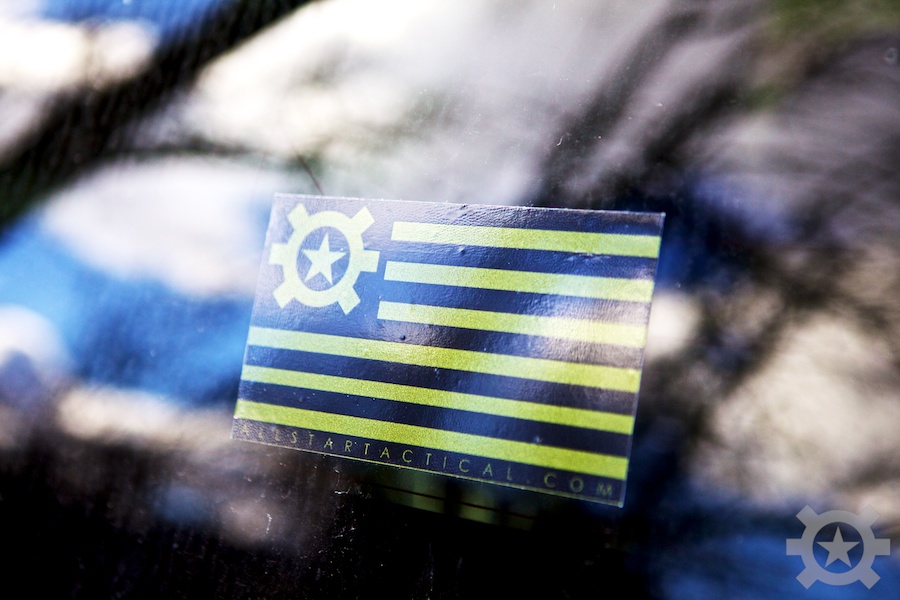 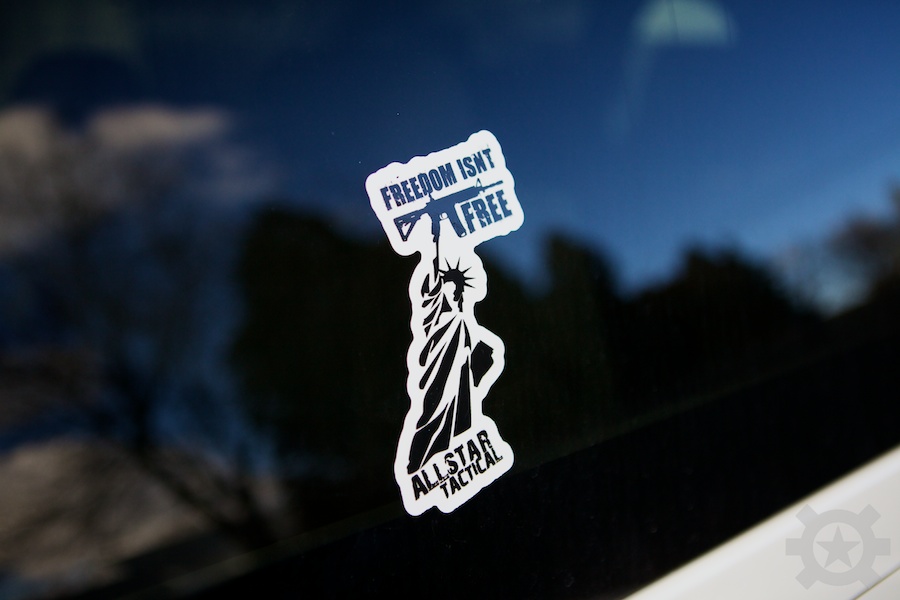 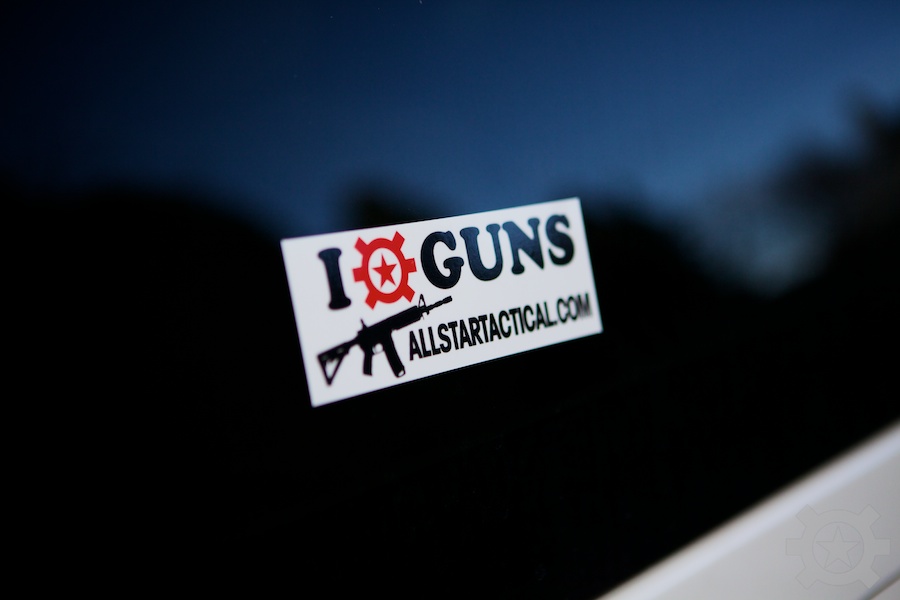 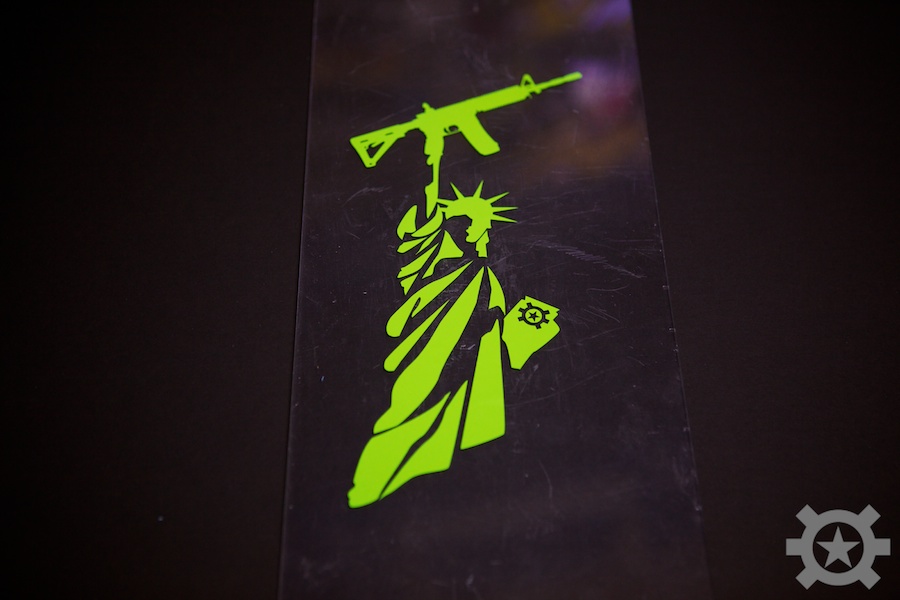 With the addition of a couple new pieces of glassware to our schwag section, we decided that we would create it's own section for Glassware and drinkware. Head over to our Glassware Section and check out some of the new products. We added our AT Liberty Beer Mug and our AT Liberty Pilsner Glass to our glassware product line. Keep checking the section or on our blog here for more glassware and schwag we'll be adding! Remember to keep an eye out for #SCHWAGFRIDAYS for discounts on Allstar Tactical schwag!

Here are some pics of our two new glasses: 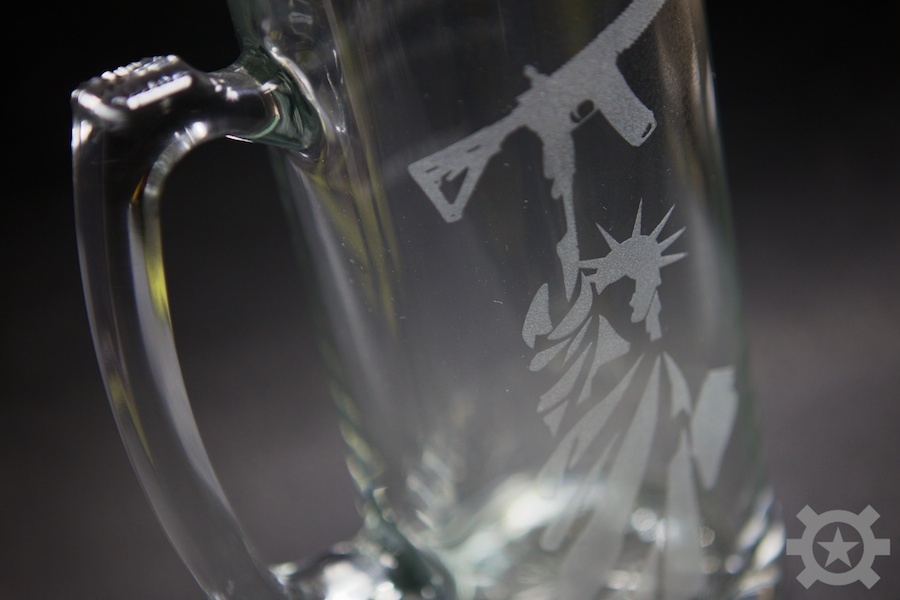 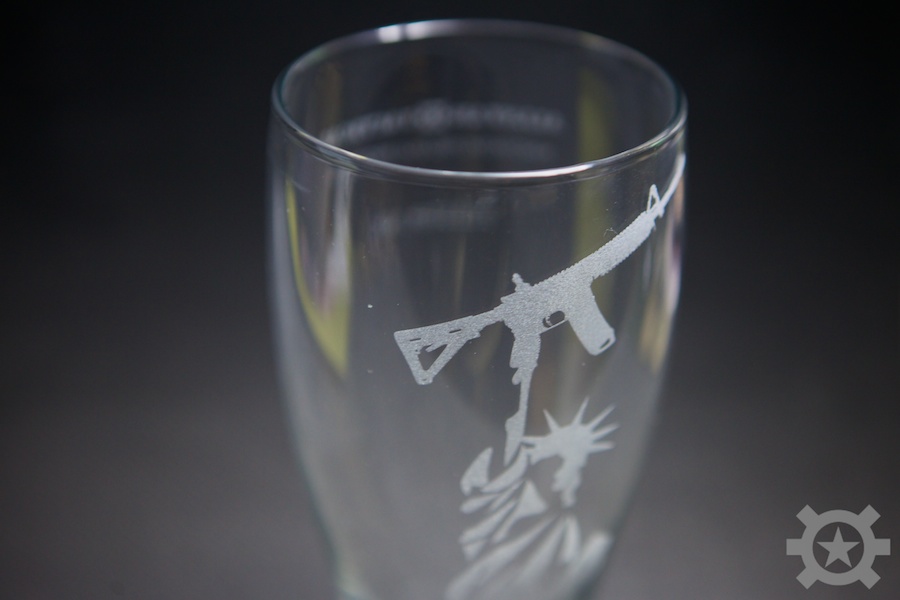 We spent the last week hard at work designing a bunch of new T-Shirts for Allstar Tactical schwag! Some great ones like Don't Hate Me Cause I'm Black, Guns Shoes and Tattoos Girls Shirt, I Heart AR15s, Keep Calm and Pew Pew Pew, and our Skull Don't F*CK with Us Shirt. Head on over to our Allstar Tactical Schwag Shirts Section and check them out!!! We hope you like these design and you can start preorder them right away! They should be shipping within 2-3 weeks! Also keep an eye out for #SCHWAGFRIDAYS where every Friday we pick one of our pieces of Schwag to be half-price! 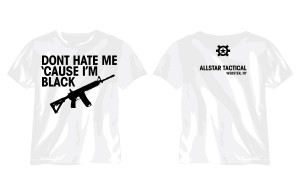 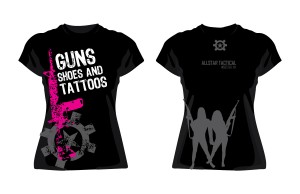 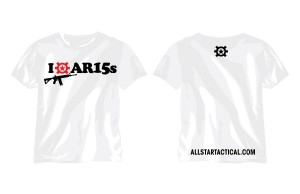 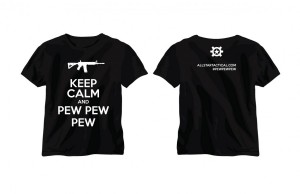 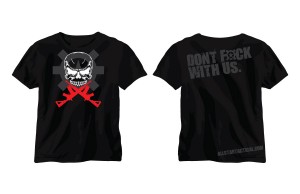 USPS is now available as an option for shipping parts and products. Please remember that we require any firearms to be shipped via USPS. We know this will help some of you out with shipping gas tubes, schwag, tshirts, etc. Please contact us if you have any questions! Thanks! 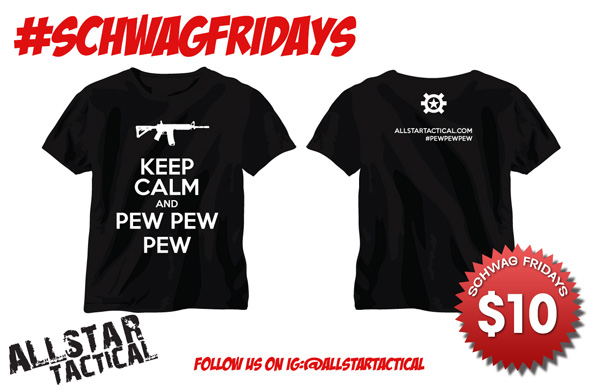 Check out our brand new shirt!!! Keep Calm and Pew Pew Pew!!! We are now taking orders for these and should see them in a couple of weeks! Place your order today to get it for $10! TEN BUCKS! The price will go back up to $20 tonight at midnight! 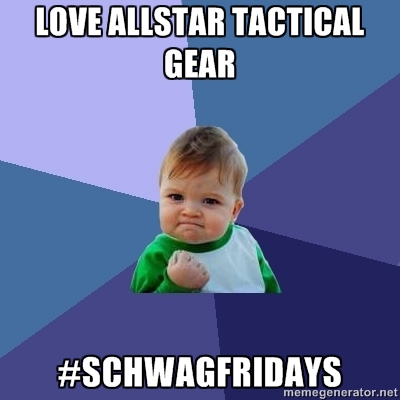 Check it out! Starting TODAY (2013.02.08), we are starting #SCHWAGFRIDAYS. What's that mean? Every friday we're going to add a new piece of schwag to our website for you guys to collect. For that day only it will be HALF PRICE. Everything from new t-shirts, patches, and challenge coins, to hats, hoodies and more! Keep checking back on our blog here, our Facebook page, follow us on instagram and Twitter, and get the latest in Allstar Tactical gear and Schwag!